Our organization is a place where seasoned professionals, tool makers, and hand-tool enthusiasts can gather and share their love for hand-tools. It all started in the year 2000, with carpenters in Japan, looking for ways to interact with a dwindling population of tool-smiths. The first gatherings started when tool merchants invited carpenters to try out their best quality hand tools before buying them. Usually in Japan the finished tool is not yet honed to razor sharp, that’s done by the individual craftsman using water stones of differing coarseness’s. For example, the honing process with the hand-plane includes tuning the wooden tool base. This process takes time to learn and test the results, until the carpenter is satisfied that the tool can create a smooth finish on wooden surface. Every single woodworker in that tradition, whether cabinet-maker, or temple builder, had several different hand planes to satisfy his own particular needs.

Gathering people from different wood working trades historically never happened in Japan, because to learn a trade took years of apprenticeship and hard work, most of that time bent over sharpening stones to eventually master the craft and become one with the tools. This individualistic approach to wood working left the tool makers guessing what their “clients” really needed in the finished tool. Beginning twenty years ago, a few carpenters decided to break with tradition and invite tool makers and other master craftsmen to share in a “carpenters fair”. It was like the genie had removed the cork from the bottle. 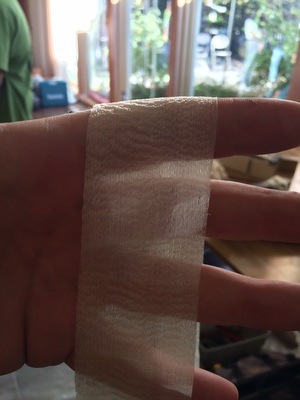 A shaving one-half as thick as a human hair. Oakland 2015.

These carpenters fairs swept across Japan and became real events attracting thousands of people and more importantly, began to be places where beginners could stand and watch master-carpenters show off their sharpening skills in competitions for who could shave the thinnest shaving. These shaving contests have begun to be exported to other countries and now more than 2000 individuals count themselves as part of this movement. Tool-makers are very much a part of the movement as well. In Japan tool makers can make a majority of their yearly earnings during the regional events. Tool makers and master craftsmen can share mutual understanding of how the tools work, and under what conditions. The shaving contests also allow specialty crafts to display their skills. The craft of log-hewing, all but disappeared in Japan forty years ago, has now enjoyed a huge revival. Logs are dragged in out-of-door contests where the raw log is transformed into finely hewn interior beams.

Todays Kezurou-kai events in Japan are nationally recognized as times for people to gather and learn from one-another.

The recent Covid pandemic has made it difficult to keep up the momentum, both in Japan as well as here. Our group by bringing this to Santa Cruz in 2022, hope to show off our skills, as well as introduce people to ways which encourage local craftspeople to gather, meet one another, and perhaps dust-off your Japanese plane and get it tuned-up with the help of experts.