As I unfold and refold the washi-paper coverings of my own precious tools I think back on the experiences of this most recent event. The polished steel glimmering in the bright Autumn sunlight seems a fitting way to remember the Hay Barn Event. Over and over again that day I was struck by the connections we share. With 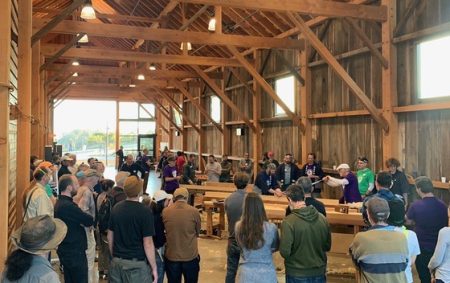 one another as a team, with those who came from far and wide, and with humanity itself – stretching back in time and forward in hope. Yes it was all there on Sunday. At times it felt too crowded and scary after years of fear – symbolized by face coverings, social distancing — but also reflected on a growing uncertainty of how we as individuals would meet the challenges of coming back to normalcy. Lots of those feelings were expressed during the day.

Many of us found stories deeply buried in ourselves – as ways to express our hopes and aspirations. Some of us tried to express the intangible spirit of the Kezurou-kai. Originally organized to provide a place for iron 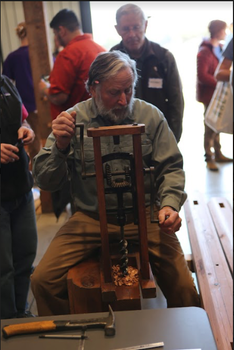 smith tool makers to meet and socialize with carpenters, cabinet makers. Back in 2001 when the movement was still young those early gatherings would include stout planks of wood gleaned from forests and selected for their unique qualities of straight-grain and tight growth. Those select qualities had been defined over centuries. In Japan when old growth forests were depleted seedlings were planted, tended for generations and eventually provided superior materials to support the culture of finely forged tools and carpentry.

The gathering in Santa Cruz brought together people who understand wood, and respect and honor tool makers. Deep respect for the sacredness of ancient trees and the polishing of hand-forged steel are linked together and represent the foundations in our Kez-movement. For those of us who have visited previous gatherings we can understand the dedication in hours of polishing that it takes to finally approach the cedar planks and pull a super-thin shaving. The texture of the finished wood is transformed into a surface that is so smooth and soft to the touch … and that is ultimately a way of honoring the trees in the forest. 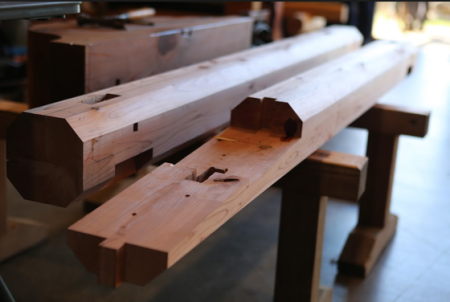 Back in the earliest days of the movement, when people gathered they often also used their tools to build something using traditional tools and joinery. The 2022 gathering incorporated traditional design, locally harvested redwood into a prefabricated modular structure using Japanese joinery techniques. Eight individuals arrived with pre-cut parts and assembled them as a working demonstration during the event. The assembly was elegantly proportioned containing an example of hewn cross beams, tightly joined columns. One of the features many observers commented on was the mirror-polished surfaces which reflected the same silky smooth polished-finishes which our organization promotes. Having that extra refinement being demonstrated allowed everyone to glimpse the entire process of how simple hand tools can transform materials. 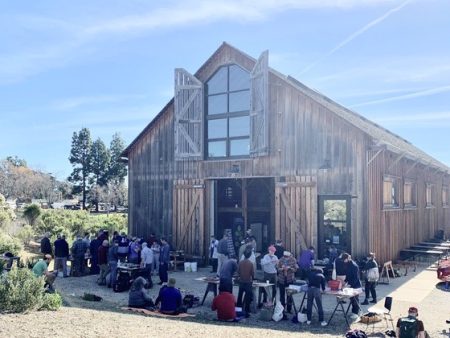 Everyone gathered in Santa Cruz had smiles on their faces, we all witnessed the excitement and potential of the gathering. Groups gathered around the sharpening tables to watch experts polish their precious steel, as well as new enthusiasts trying to get the correct angle on their blades. Others carefully shaving grooves in wood block planes to snugly-fit blades. Watching what was happening for the entire day I was left with gratitude for the way everyone brought knowledge to share.

As we begin planning for our next Event in the Fall of 2023, we recognize that our members are doers. They gather in order to share with one another. Our organizing committee had support from numerous volunteers, and we asked others to contribute time and materials and demonstrate their skills.