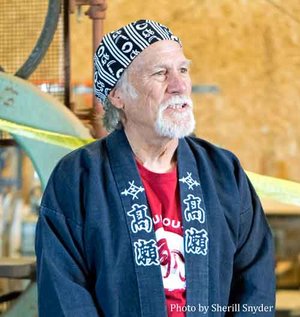 Karl Bareis has worked with Japanese carpentry since 1973, beginning with a traditional residential carpentry apprenticeship in Kyoto. His apprenticeship continued in Gifu Prefecture with traditional minka-style building at Yamaishi Komuten of Gujo Hachiman, working with a team to de-construct and rebuild seven farmhouses and convert them into a resort complex—a two-year project.

An introduction to Kiyoshi Yasui of Yasuimoku Komuten in 1977 connected to the American Craft Council which led to trips introducing Japanese culture to American craftspeople. In 1980 Karl was asked by Mr. Yasui to help design and construct two tea ceremony rooms at Hakone Gardens in Saratoga, California.

Other public collaborations include designing and building an 18th-century Japanese farmhouse at the Brattleboro Museum in Vermont as part of an exhibit highlighting traditional building techniques. This was co-sponsored and filmed by the Timber Framers Guild of North America in 1987. Karl has had his own company, Santa Cruz Timberframes, for thirty-three years and designed and built more than forty projects which are influenced by the decades spent in Japan. Karl’s timber frame structures are a sustainable reflection of the forest—focusing on locally harvested trees, specializing in curvilinear beams of madrone and redwood. His portfolio of design-built work is varied—from a Rinzai Zen temple retreat and teahouses to timber frame barns and residences.

Karl is a founding Board member of Kezurou-kai USA and is currently the Board President. 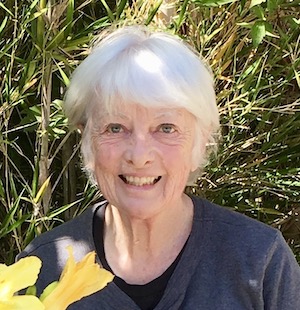 Ginger Bareis’ education in languages and linguistics took a jump when she landed in Japan in 1970, and spent the next 10 years there immersed in Japanese tradition—farming, weaving, tea ceremony, and shamisen. Began designing and leading 6-person tours exploring traditional Japan in 1978—“if it’s ancient and beautiful—we’re going there!” The grandfathers and grandmothers in the villages and towns were strict and good teachers—sharing their knowledge with the next generation…culture and context…process.

Serving as our Board Secretary, Ginger brings decades of cultural event organizing and non-profit operating experience to our group. 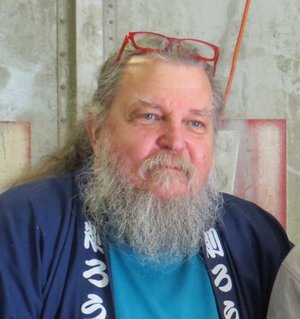 Jay van Arsdale apprenticed early on in his family’s blacksmith shop in Kentucky. After graduating from Centre College in nearby Danville, Ky, Jay came to the SF Bay Area where he received an MFA in sculpture from Mills College in Oakland, CA in 1972. Things came into focus in the mid-1970’s after seeing a demonstration by Japanese daiku Makoto Imai, who Jay learned from for a number of years.

Jay has worked and taught in the Bay area since the early 80’s. He has given demos/lectures and other presentations for many organizations including the Japan Society, San Francisco Asian Art Museum, the Exploratorium, Academy of Science, UC Berkeley School of Architecture, North American Timberframers Guild West Coast Conferences and numerous national wood working shows.

Jay is also the author of Shoji–How to Design, Build, and Install Japanese Screens, (Kodansha, ‘86), Introduction to Japanese Woodworking (video,’ 87) , and contributing editor on The Complete Japanese Joinery, (Cloudpress ‘89). He also has written numerous magazine articles, produced multiple instructional videos, and appeared on TV in Japan and the U.S. 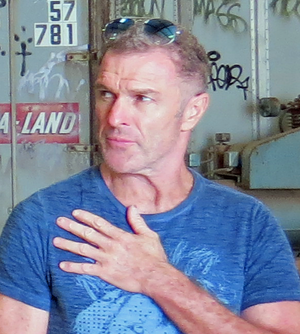 James Wiester lived in Japan over a ten-year period during which he worked as a laborer and completed a six year apprenticeship in residential carpentry. He has built furniture, houses and everything in between in the Japanese style since his return to the US 20 years ago. His primary interest as a Board member of Kezurou-kai USA is bringing the Japanese sensibility of pragmatism to the cause.

James Wiester lived in Japan over a ten-year period during which he worked as a laborer and completed a six year apprenticeship in residential carpentry. He has built furniture, houses and everything in between in the Japanese style since his return to the US 20 years ago. His primary interest as a Board member of Kezurou-kai USA is bringing the Japanese sensibility of pragmatism to the cause. 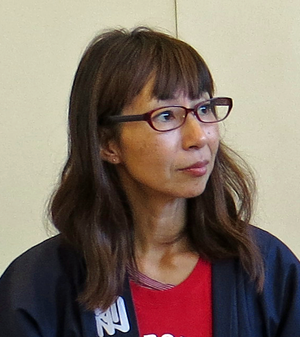 Sayuri Suzuki Schreiber was born in Kawasaki and grew up in Koga, Japan. She moved to the Bay Area in May, 1996 and has been in the Japanese tool trade ever since. Running her own business has expanded and deepened her knowledge of the tools, materials and Japanese woodworking in general.

Every year, Sayuri travels from Berkeley to Japan to create and maintain relationships with the Japanese toolmakers, craftspeople and carpenters who make and use the various tools she sells all around the world.

In 2010, Sayuri was asked to organize an event for Japanese style woodworkers to get together in the United States (Osamu Hiroyama, the former owner of Hida Tool & Hardware and Sayuri’s one time employer, used to do this and had been seeking a way to start it up again). In January, 2015, Sayuri invited James Wiester, Mike Laine, Jay Van Arsdale and Dan Hunt to join her and, along with Karl and Ginger Bareis, they founded Kezurou-kai USA, a sister organization to Kezurou-kai Japan.

In 2017, Sayuri replaced Dan Hunt as treasurer of Kezurou-kai USA. She has also organized and been running the administrative committee, the vendor committee and the media committee to build a strong and steady structure to support the organization behind the scenes. 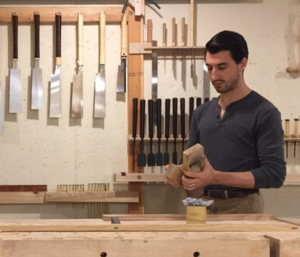 Brian Holcombe designs and builds original furniture, cabinetry and traditional shoji. Brian draws influence and technique from traditional Japanese craft along side contemporary industrial process. Brian is a professional woodworker, operating his furniture studio in Princeton, NJ.Brian joined the Board of Directors in 2019. 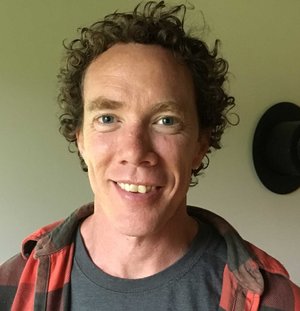 Andrew is a custom furniture maker working and living in New York’s Hudson Valley. Best known for his use of traditional Japanese hand tools, Andrew demonstrates and teaches throughout the Northeast.As a self-taught woodworker he offers a unique perspective to other Americans exploring Eastern woodworking. His workshops demonstrate that by understanding the fundamental principles behind other cultures’ tools and techniques all woodworkers can benefit. A frequent contributor to Fine Woodworking magazine, he is eager to share what he has learned in his twenty plus years of making furniture.Andrew has been on the Board of Directors for Kezurou-kai USA since 2017. 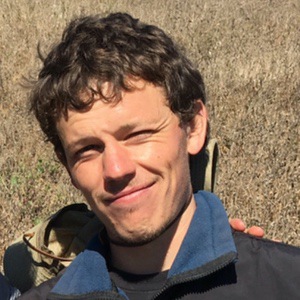 Toby Hargreaves majored in Nature and Culture at UC Davis. He also studied Japanese language and completed a semester-long study abroad program in Japan near Mt. Fuji. Back in Davis, he followed college with a year-long uchideshi (apprenticeship) program in the martial art Aikido. Feeling drawn to construction, he found work with a contractor for a year in Davis and got a taste of conventional building.

In 2010 he connected with Karl Bareis and began a six-year apprenticeship in Japanese carpentry and custom home building. During that time, working at Karl’s shop in the redwoods, he discovered a love for the age-old link between forests and structure. This connection seemed desperately missing (or hidden) from the majority of American homes and buildings. The concept that logs could be used with minimal processing in a building was a revelation. He is fascinated by traditional timber frame construction, but also interested in the development of California natural building styles.

Toby currently lives with his wife, son, and dog in the Santa Cruz Mountains. He joined the board of directors in 2021. 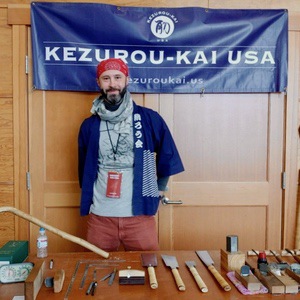 Jason started his woodworking career as an apprentice to Oakland daiku Jay van Arsdale, building over 70 bonsai display benches for the Bonsai Garden at Lake Merritt. Prior to becoming a woodworker, Jason was a postdoctoral fellow in materials science at Lawrence Berkeley National Laboratory. He holds a Ph.D. in soft matter physics from Yale University, where he researched the structural color of bird feathers. He holds several patents related to thermoelectricity and nanoscience.

Prior to his nomination to the board, Jason has been an active member of Kezurou-kai USA since he attended his first meeting in 2015. Since then, he has participated as a presenter and competitor – taking third place in the Kezurou-kai USA planing competition in 2019. That same year Jason represented Kezurou-kai USA at the 43rd Annual Port Townsend Wooden Boat Festival. He continues to work with Jay at Laney College in Oakland as a teaching assistant for one of the only programs in Japanese woodworking and hand tools offered at the college level anywhere in the world.

In 2018, Jason and another Bay Area carpenter completed the installation of an original-design machiai in the Japanese Hill and Pond Garden at the Brooklyn Botanic Garden. He works both independently as a designer and woodworker, and with Joinery Structures in Oakland, CA.

Jason joined the Board of Directors in 2021. 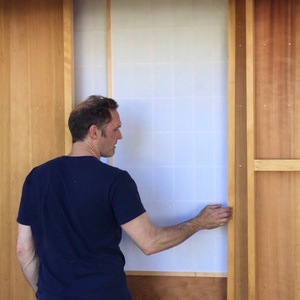 Jeff began practicing Japanese carpentry twenty years ago at Paul Discoe’s Joinery Structures and now runs 3 Sticks Design / Build where he specializes in traditional Japanese buildings. He writes about the philosophy of the craft at www.knowinghands.wordpress.com. He currently lives in Oakland, CA.

Jeff joined the board of directors in 2021.